Just around a year ago, the world succumbed to a pandemic that brought unthinkable pressure and stress to all in the forms of lost loved ones, jobs, and uncertainty. Under the added weight, I, like many others, have turned towards off-road adventures as an escape and to safely enjoy time with friends and family. With more time out on the trails, the need for equipment made itself clear, and staying prepared has been a priority to keep the overlanding community safe.

I've actually been interested in Garmin's Overlander since its release, but under the circumstances, I prioritized getting a unit installed into my vehicle and I was really excited to do so. The Overlander is full of features, but this write-up will be the tip of the iceberg and I'll just list a few of the reasons I wanted one of these so badly.


I also want to mention that I wasn't sponsored by Garmin, Ram Mounts, or ProClip USA. In fact, I found the Garmin Overlander on Facebook Marketplace brand new for less than $200! I genuinely wanted an Overlander for the reasons above, but there are so many other benefits of the Overlander that I just can't cover in one thread/video.

Let's get into the installation!

The Overlander comes with a Ram mount that uses a not-so-standard windshield mount that I have absolutely no reservations about, but with the large 7" display, I just didn't want to sacrifice the real estate and visibility out of my windshield. Below you'll see a standard setup with the windshield mount and the charging cable. Note that the Overlander connects to the mount via a magnetic charger so it pulls on and places on with ease and simply begins charging once connected- no fussing around with USBs. With the traditional setup, the navigation unit sits in the line of sight and the cable hangs below it. I was really interested in a more permanent solution that wouldn't occupy one of my two 12V sockets and that wouldn't block any more of my vision for days that I may not be using the unit. I found ProClip USA that makes mounting solutions traditionally for phones, but the Overlander is considerably lighter than I had expected and I had full faith in the ProClip mount. It mounts right up to the passenger side of my Jeep Grand Cherokee WK next to the shifter. 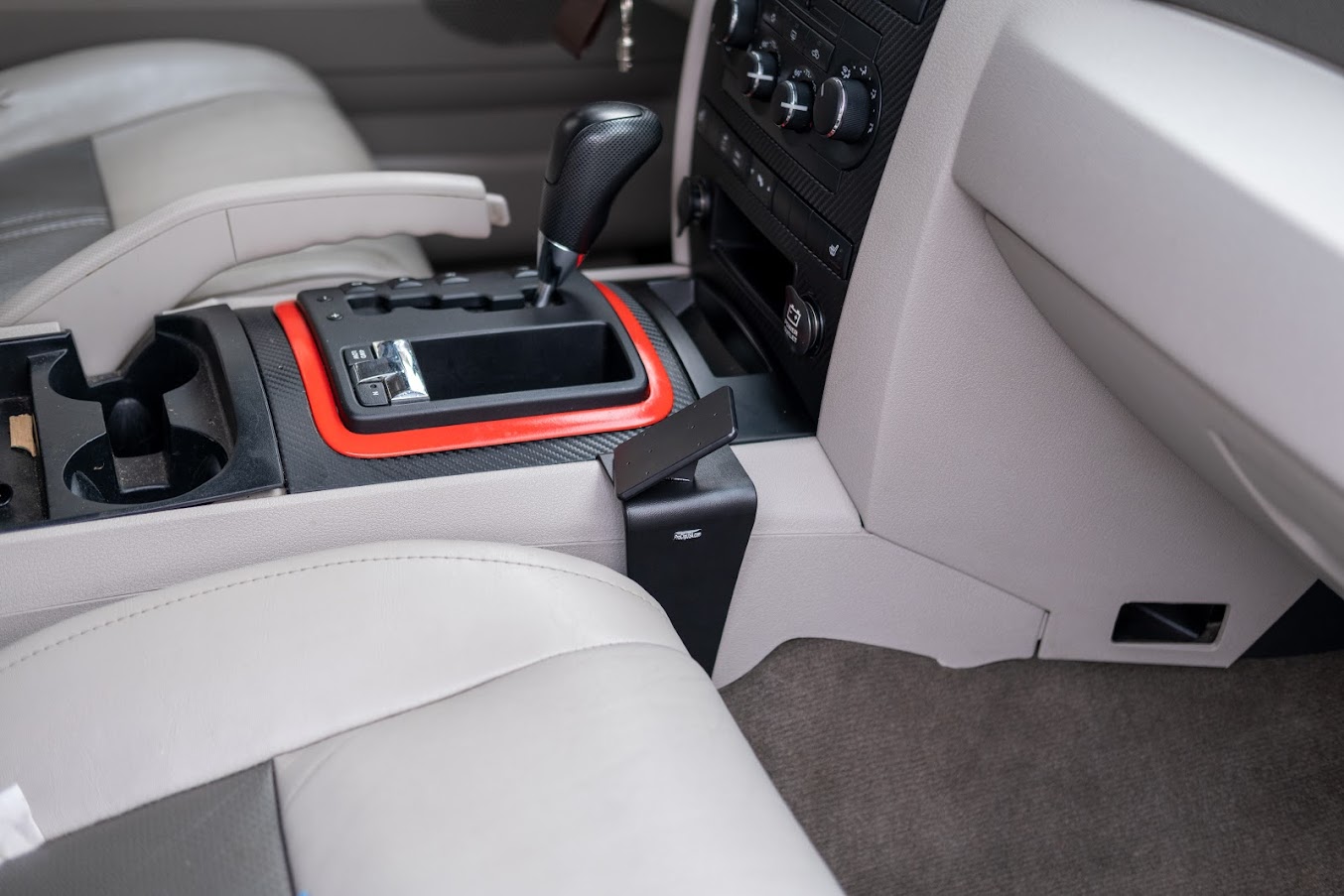 The mount gives a blank mating surface that I would use to drill holes in to bolt the Ram Mount into. 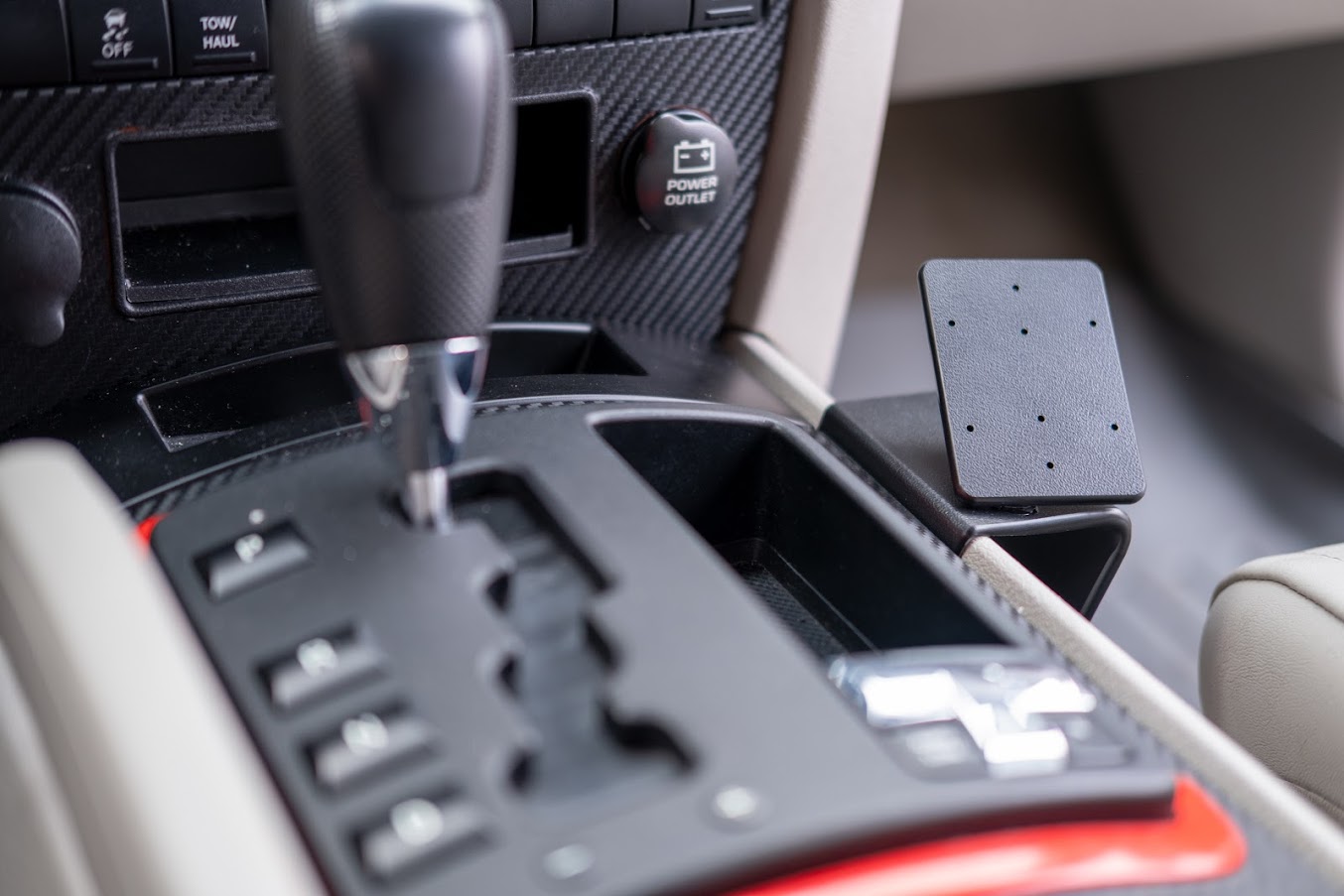 I opted for Ram's EZ-Roll'r cradle which utilizes the magnetic charging base included with the Overlander but also allows the unit to be locked into the cradle to deter theft. Without it locked, it still places into, and removes from, the cradle really easily and avoids any vibrations. 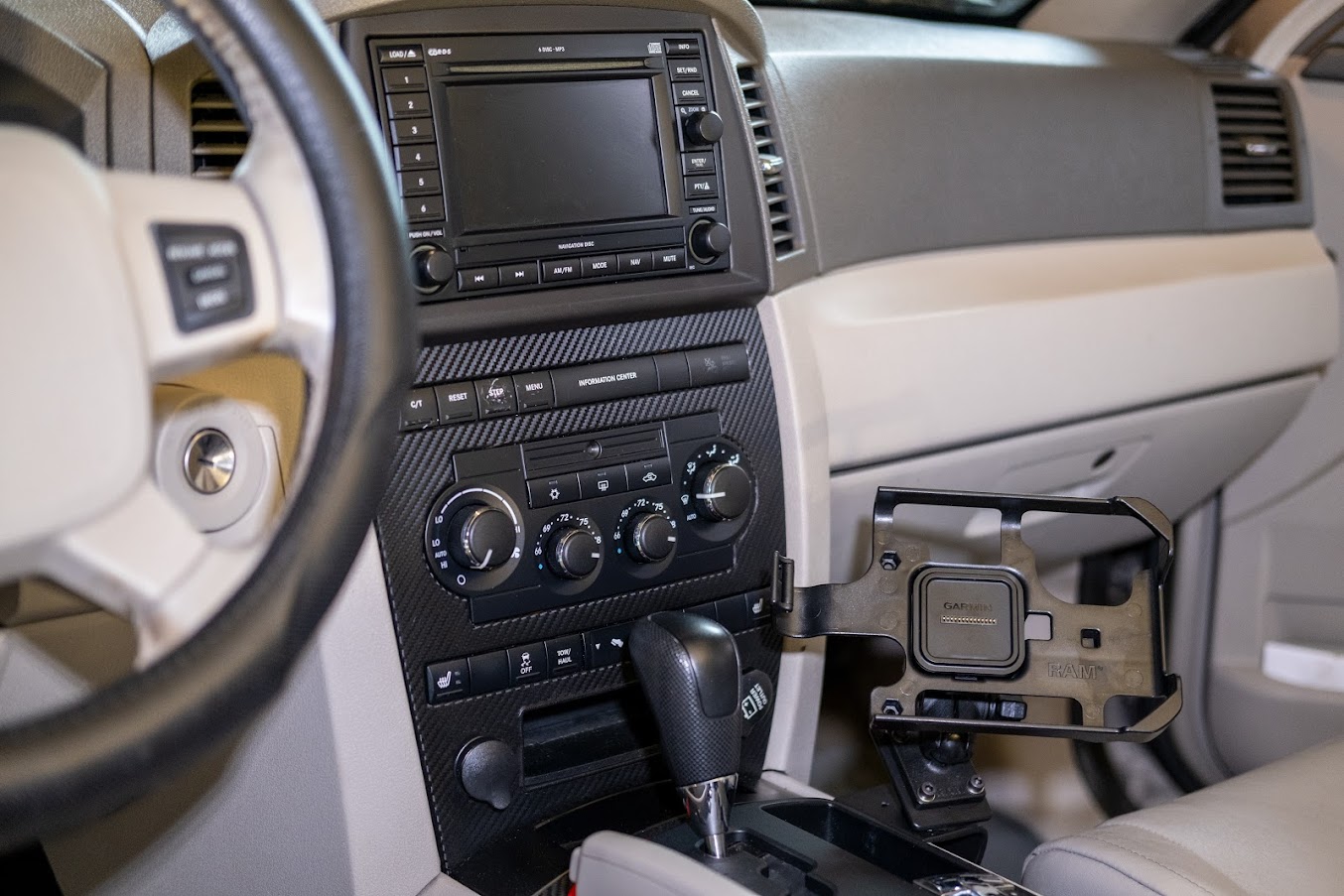 To get around the included 12V plug, I went for Garmin's USB bare wire power cable kit that comes with a fused harness that allows me to take 12V from anywhere the Jeep provides it. 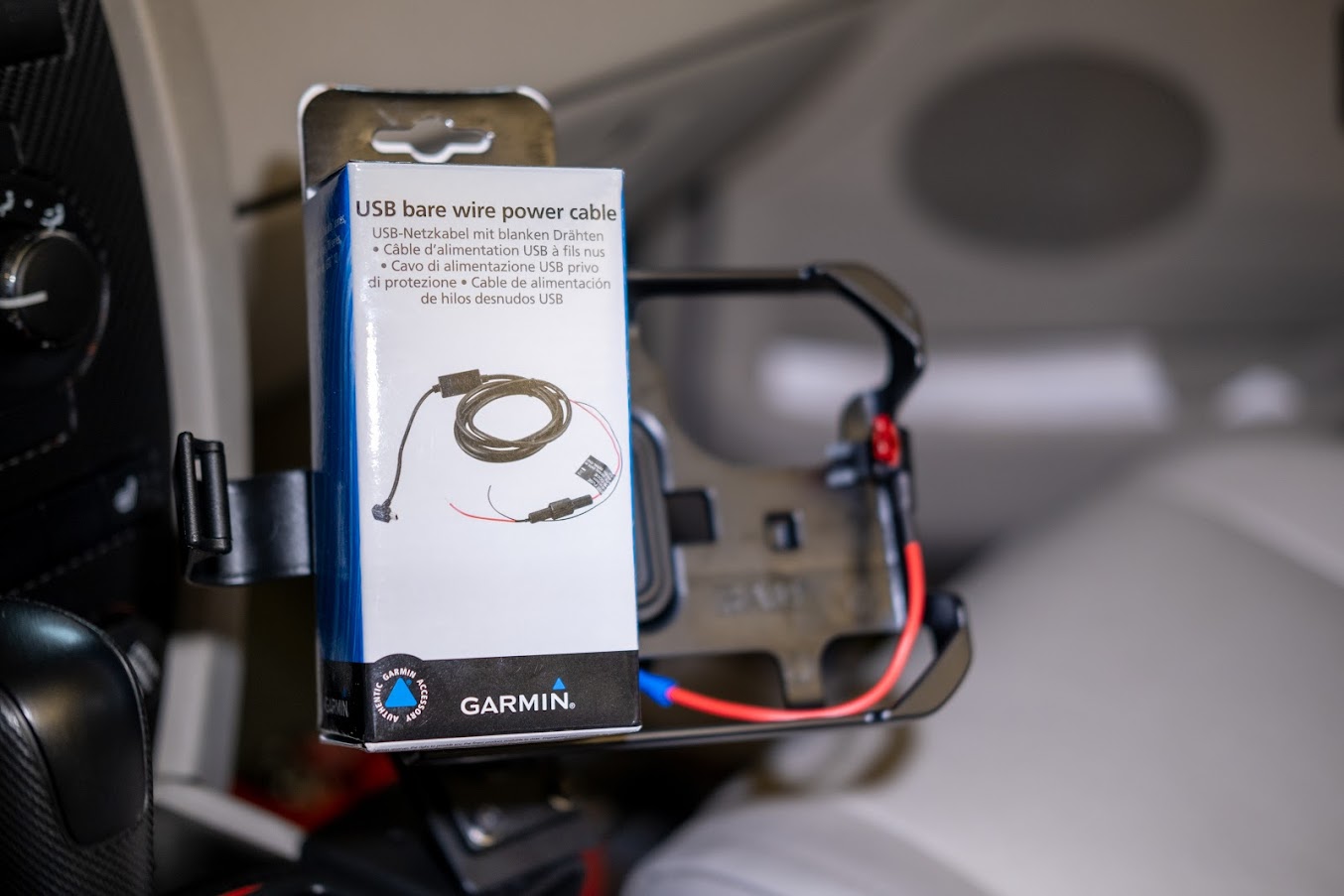 I tapped into the gauge cluster lights at the fuse panel below the steering wheel so that the charger would only provide power to the Overlander when the vehicle is running to avoid draining my battery. I ran the wire just under the head unit and it made for a really clean installation and the ProClip mount perfectly hides the wire. I'm sure you could drill a hole and mount a grommet to hide more of the wire, but this was fine by me! 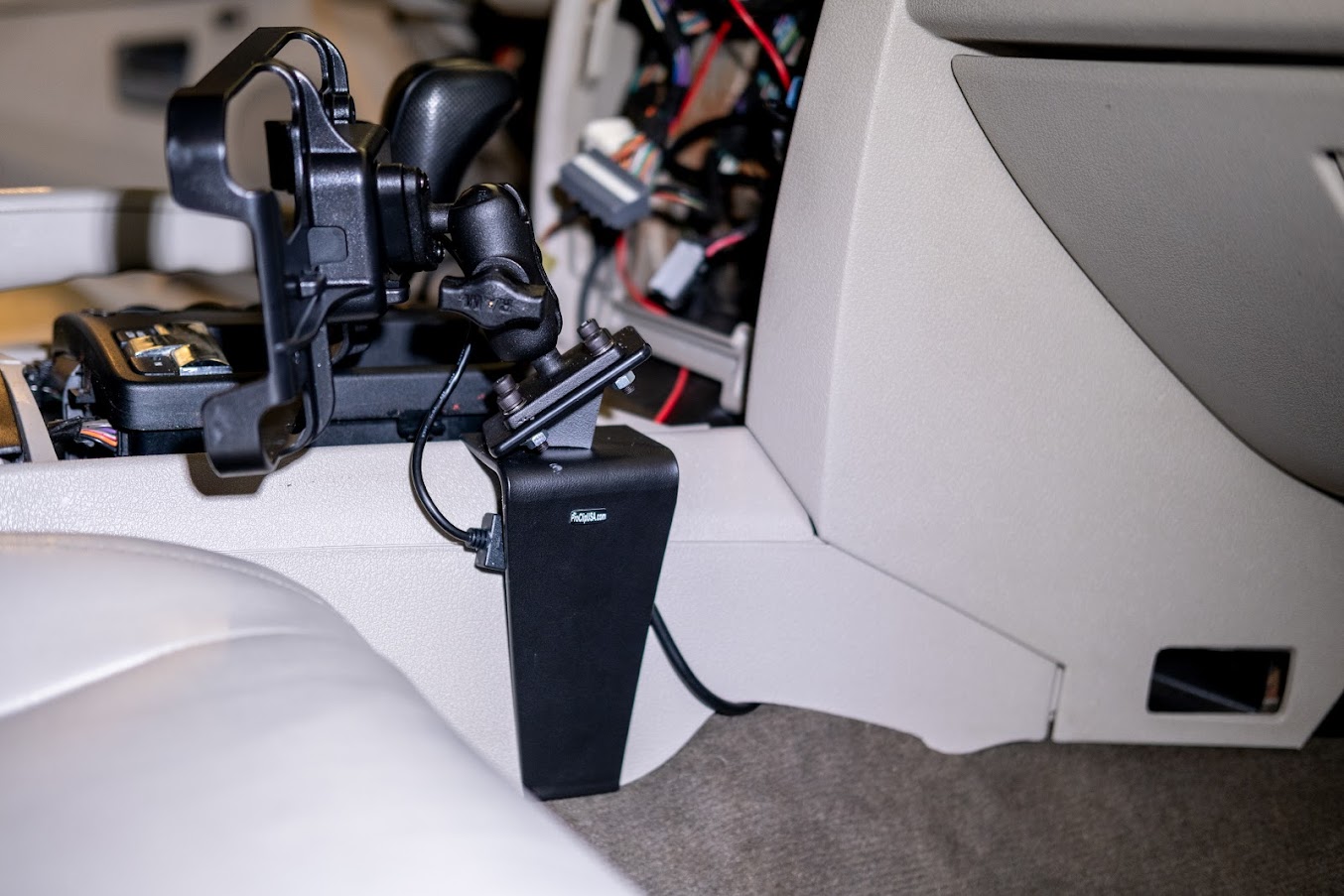 And that was it! The navigator was ready to go and the charger worked perfectly hardwired into the rig. It looks amazing and I'm excited to get on some trips with a passenger to get their take on the ability to turn the unit so it faces them allowing them to see the trail ahead. I took my Jeep on some local trails to see some of the features of the Overlander. I recorded an unmarked trail, uploaded it to Garmin Explore, and took a look at some of the off-road-specific features Garmin boasts about on their site. I made a video on my YouTube channel covering everything from details on the install to in-cabin footage of the unit on and off roads. I'll link that below and I'd love to hear what you guys think about the install and what you may have done differently. I have many long trips planned for this spring and I'll have the BC 35 wireless cameras, an inReach, and the GPX files uploaded. That way, I can do a long-term review of EVERY feature the Overlander has packed in. From what I've seen, the price tag is more than justifiable, and when you consider the added safety that having a standalone GPS unit aside from your phone, it's priceless.

good video and really informative! nice to see a different way to set it up. did you use the pitch and roll feature?
Reactions: Graeman, My Jeep Story and Jim SoG

Couple of things, first off very clean install, does it interfere with a passenger leg room at all?

Second I love your jeep dude, any posts about it and what you done? I got a liberty that I have stuffed to the gills and am now considering getting a bit larger 4x4...

good video and really informative! nice to see a different way to set it up. did you use the pitch and roll feature?
Click to expand...

You're just like me, I was eyeing this thing since it came out. In my opinion, the unit could be marketed a little better because a lot of people buy it but are disappointed that it really navigates through trails in similar ways that phone applications do and that's via file downloads. However, there's a lot more functionality by using the Overlander instead of a phone and that's where the device really stands out. Being that it has more dependable tracking hardware, the expandability to add cameras, pair with an inReach, the ability to have Overland services such as campsites, land boundaries, etc all make the device worth having. Another reason I find it worth the money is that it isn't locked to one vehicle when hardwired and can just be taken in and out on the trails.

That being said, I feel like if you're mildly into Ovelranding and camping or your trips don't last longer than a night or two, I think the $700 evaluation isn't quite there for me. It's great, but I don't think most people will really need it for its full potential and something such as a tablet with cellular connectivity will be more than adequate.

As for the pitch and roll feature, I didn't get to calibrate it before I left as shown in the video, but I did so when I got back to my garage and the feature works great! I think it will be a nice tool for when I'm lifted higher and have a roof rack and rooftop tent making the Jeep more top-heavy. That way it will let me know when I'm pushing the boundaries of any angle I reach.


Jim SoG said:
Couple of things, first off very clean install, does it interfere with a passenger leg room at all?

Second I love your jeep dude, any posts about it and what you done? I got a liberty that I have stuffed to the gills and am now considering getting a bit larger 4x4...

Thanks for checking it out! I really appreciate the kind words regarding the install and my Jeep. The Overlander doesn't get in the way of the passenger and in fact, I installed it there so that the passenger can navigate and keep track of the trail while I focus on the drive. I'll be able to have the passenger not only look at the data but when I get the BC 35 cameras installed, they'll be able to do mild spotting from in the cabin while I keep my eyes on the trail!

As for my Jeep, I barely know where to start! It's a 2005 WK and came with the HEMI and QD-II which has low range and ELSD front and rear rendering this platform criminally underrated when it comes to wheeling. The front (not pictured) and rear bumpers are from a company out of Poland called Metal Pasja, the fender flares are from Iceland by a company names Fjallasport Fender Flares, it's currently completely coating Raptor Liner (check out the video on my channel if you have the time, it's my fastest growing video!), the wheels are 17" Method Race Wheels MR701 wrapped in Cooper Evolution MTs measuring just below 34 inches, and the list goes on! As I graduated college with a degree in mechanical engineering, I'm looking to take some more custom approaches to the suspension this year or next and I'll see if I can make a long-travel kit with new control arms since travel is what really limits the Jeep.