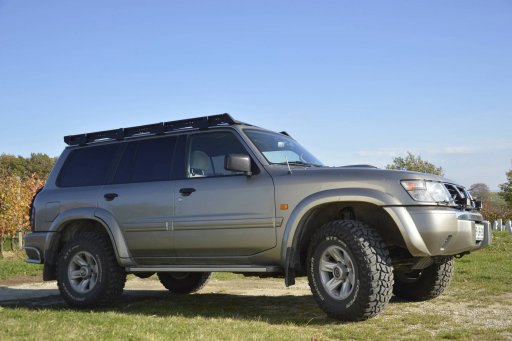 This is my 2001 ZD30DI Nissan Patrol Y61. Nothing major - it has a roof rack, 33" MT tires, tinted windows, and a sleeping arrangement inside.
However, let's start at the beginning. 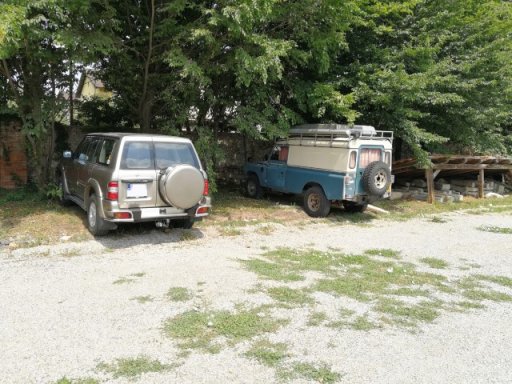 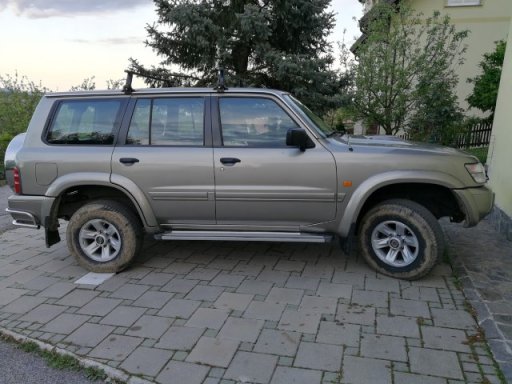 I bought this behemoth of a car back in April of 2019. It was pretty well maintained by its previous owner and apart from minor rust, it looked great.
But ... there is always a but. I knew when buying it, that the ZD30DI engines weren't known to last.
To summarize, the ZD30DI engines are notorious for blowing up. The amount of blow-by on this engine is immense and as it returns into the intake it makes the MAF sensor dirty. This can be critical as it has the VGT/VNT turbine which is controlled by the ECU. The latter controls the amount of boost - meaning it increases the amount of boost when we need the power (e.g. driving up the hill). However, if the MAF sensor is dirty, the ECU can think there is a larger amount of air coming through the intake. Because of this, it increases the amount of fuel, which as a consequence leads to higher engine temperature. EGR also does not help, as it returns hot exhaust gases into the engine. All of this, and ZD30s oil channels which were designed too small, lead to engine overheating and can lead to piston 3 or 4 letting go.
Of course, all of this can be avoided. Only a catch can, larger intercooler, EGR blanking plate, boost & EGT gauges, and a manual boost controller are needed. 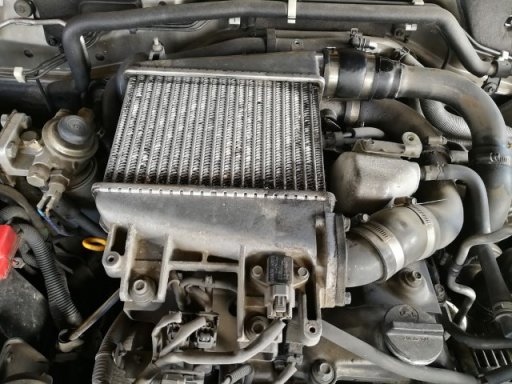 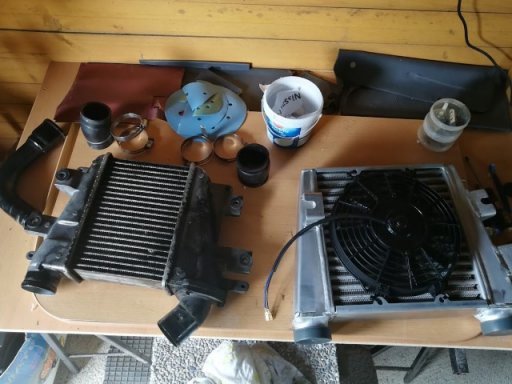 The story behind purchasing this intercooler is quite funny.
I found a guy on a Russian forum that makes them and decided to buy it. He sent it through his friend in the Czech Republic, as that meant I didn't have to pay import taxes for a package that came from outside the EU.
Imagine your phone ringing late at night and there is a Czech phone number shown on the screen. I answer.
The voice says: "Intercooler .... Patrol". I say "Yes, yes".
The voice goes on and explains something in Czech. I reply "I don't understand".
"You don't understand." Repeats what he just said, but slower.
"I don't understand".
"You don't understand." Repeats it again - really, really slowly, emphasizing each word.
I reply "OK".

I have absolutely no idea to what I agreed, but I received the intercooler. 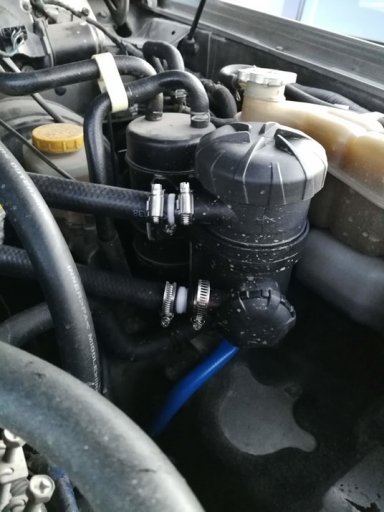 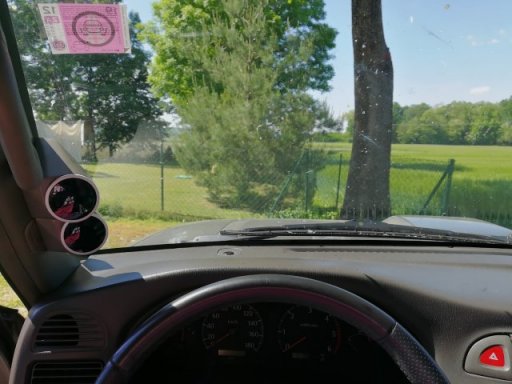 Then came the preparations for our summer trip in 2020.
That meant bigger tires and a sleeping arrangement - a bed and tinted windows. 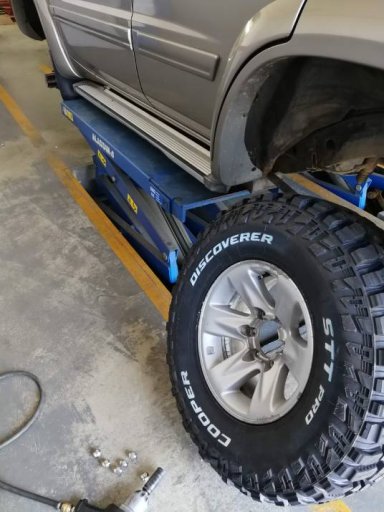 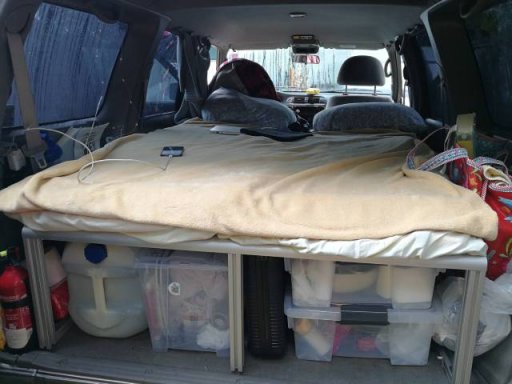 The trip was amazing! 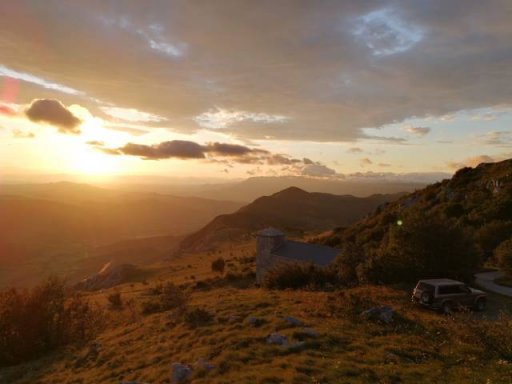 Everywhere I went, always in the back of my head were the possible problems of the infamous ZD30. All in all, it is a decent engine. Has an OK amount of power and is nice to drive, however, I wanted a bit more and something really reliable. Now, I could rebuild the ZD30, but the oil channels would still remain small, and power wise it wouldn't get much better.
That is why I started to flirt with the idea of an engine swap.
Now I am by no means a mechanic. Nor do I have experience with engine rebuilding. What I have done until now is service my own cars and replace the parts that stopped working. This is why I had (and still have) a lot of respect (and a bit of fear) for truly rebuilding a whole engine. But, this is probably for the best. I wouldn't want to rely on a poorly rebuilt engine in the middle of nowhere. However, I know that the knowledge I will gain through the rebuild will help me immensely when I will inevitably have to fix something on an engine far away from home with only myself to rely upon.

So, decided that I really want to do an engine swap, I set upon searching for the right engine. First I set my eyes upon a BMW M57 turbodiesel engine. Great common rail engine that seems very reliable and doesn't consume too much diesel. It also seems to be quite trendy when choosing an engine for either Patrol or Defender.
Then I stumbled upon 'superturbodiesel' OM606. Classical diesel engine with prechambers. Based on what I read, it truly is a reliable engine. But what really got me was the fact that you can put a fully mechanical pump from an OM603 engine on it and make it fully mechanical.

Decided on an engine I started looking at different marketplaces. I soon discovered that locally I wouldn't find it. This is why I had to look outside the country. I finally found the engine in Italy through the Facebook OM 606 Superturbo group. Because of the pandemic, I couldn't go see the engine, but the seller did send me a video and some pictures. So what would a sane person do? Well, buy it sight unseen, obviously.


If anyone speaks Italian I would be thankful if they could translate what the seller was saying. 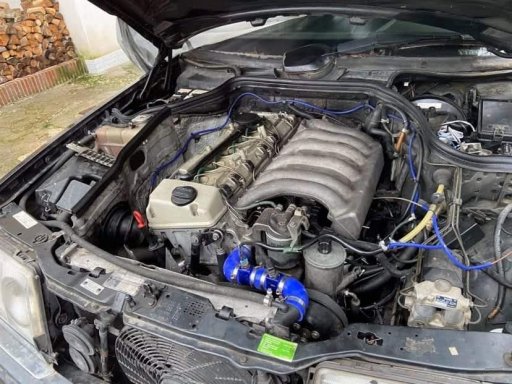 The engine had (so claimed the seller) only 158 000 kilometers on it (around 100 000 miles). We agreed on the price of 600 euros (685 dollars) and on the fact that we both try and find the cheapest delivery service. As I found out, this was the hardest part. Not a lot of them wanted to pallet an engine. We ended up going with GLS. The cost of delivery was 265 euros (300 dollars).
The seller sent me a picture before posting: The pallet was delivered after 10 days. And, yes, first came the shock. The seller stupidly chose the pallet that was too small. The delivery service had to put another pallet under it so that the engine didn't drag on the ground, 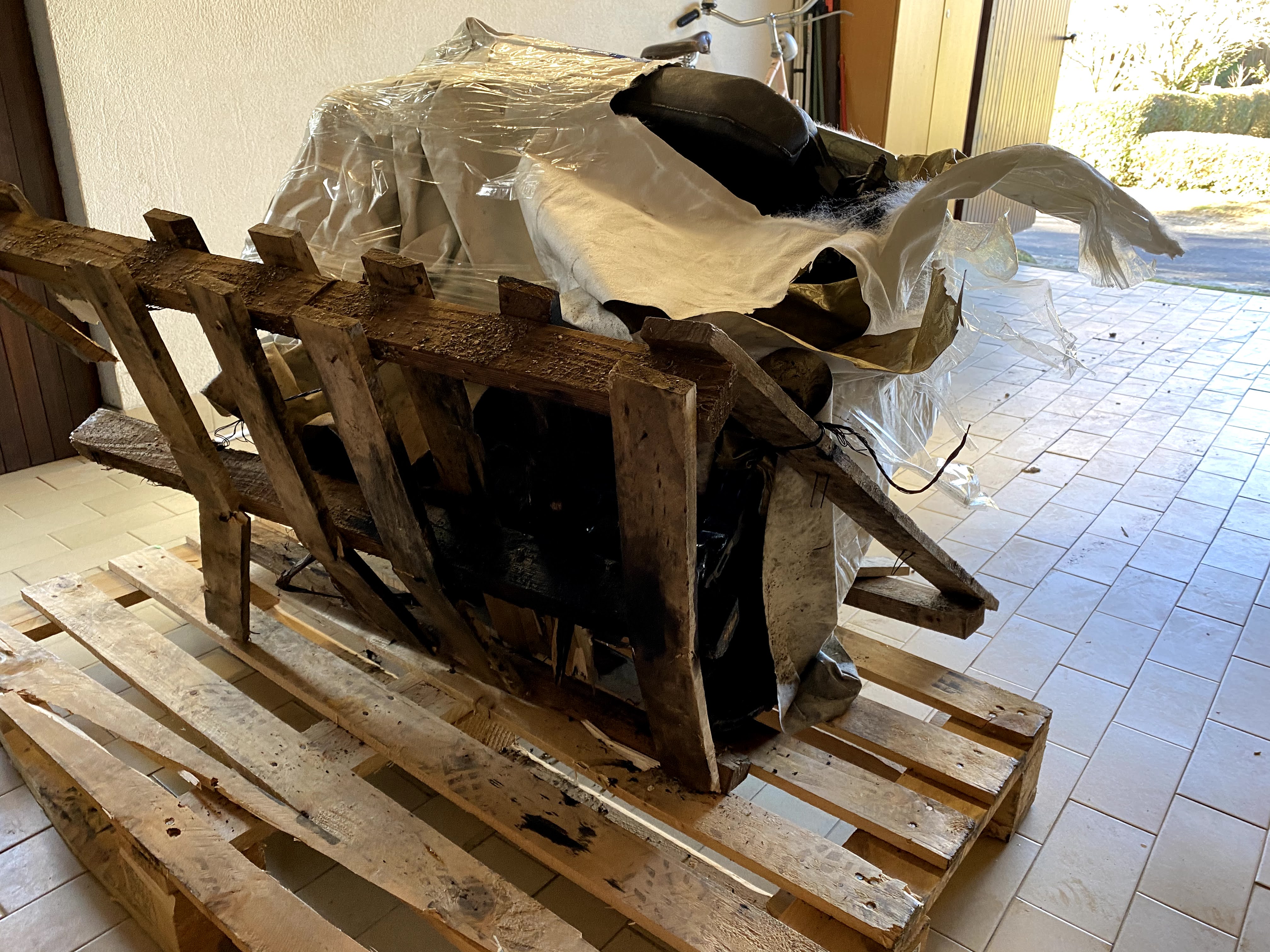 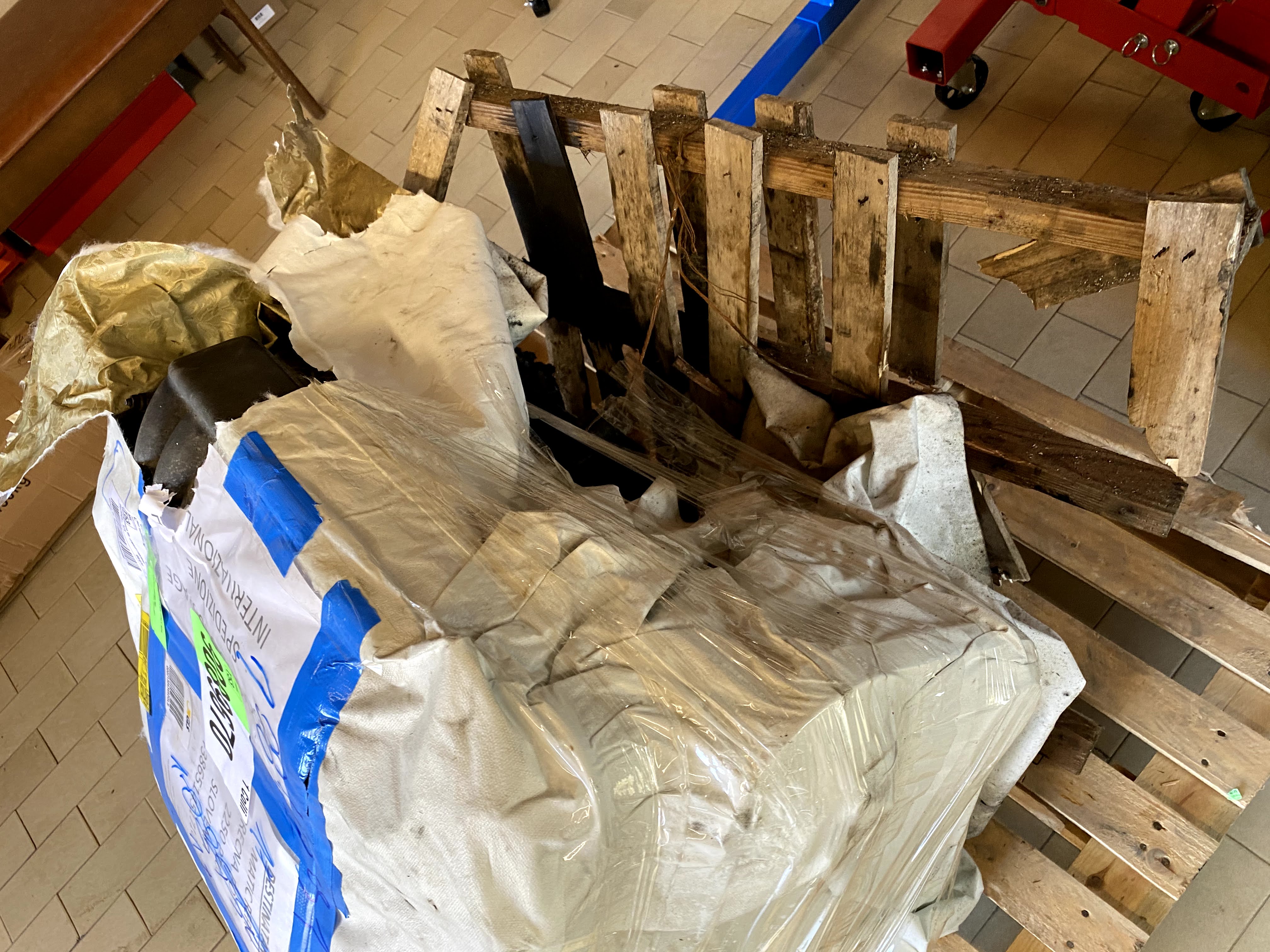 But, hey, the engine seemed fine and without visible damage. 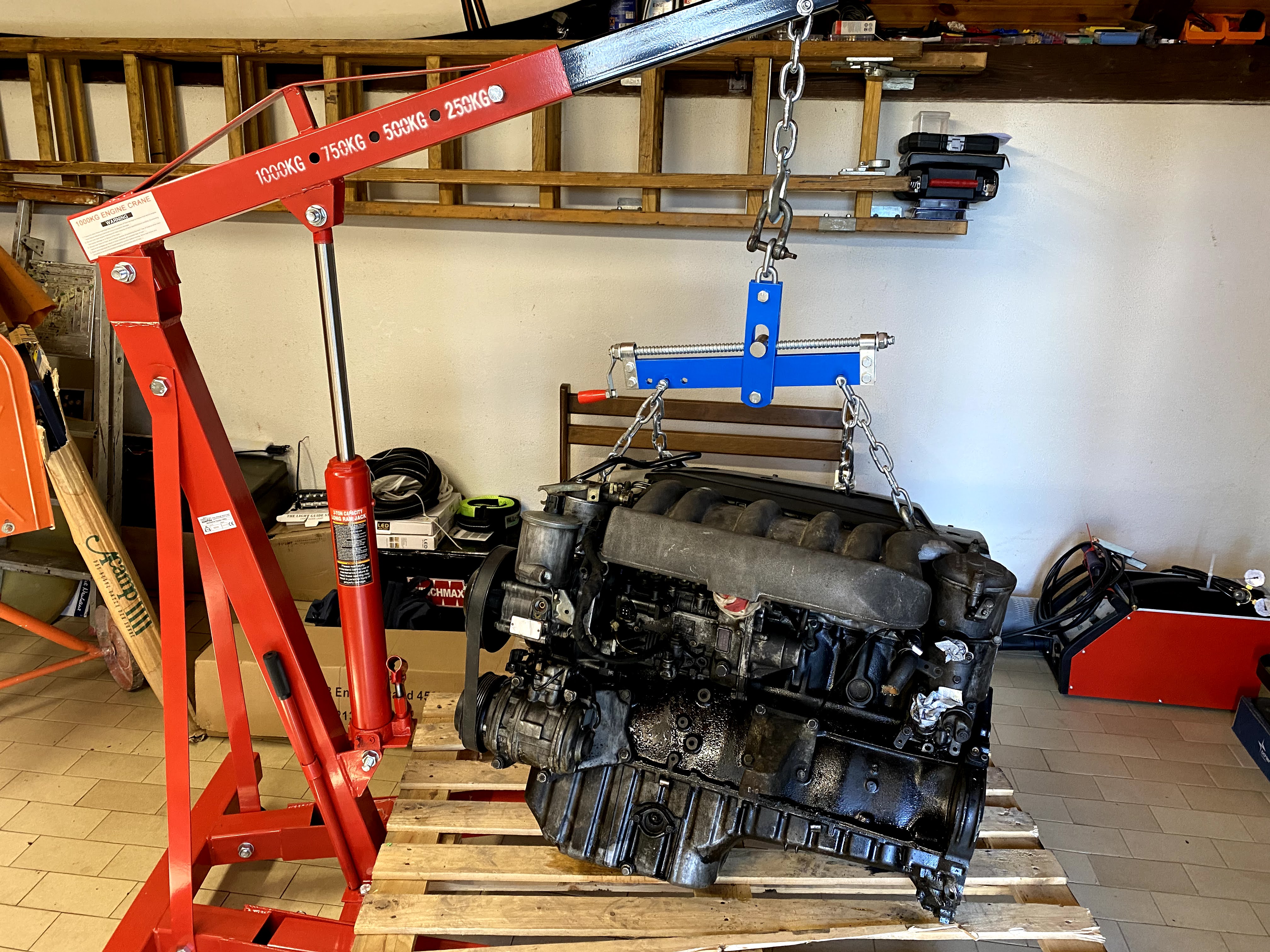 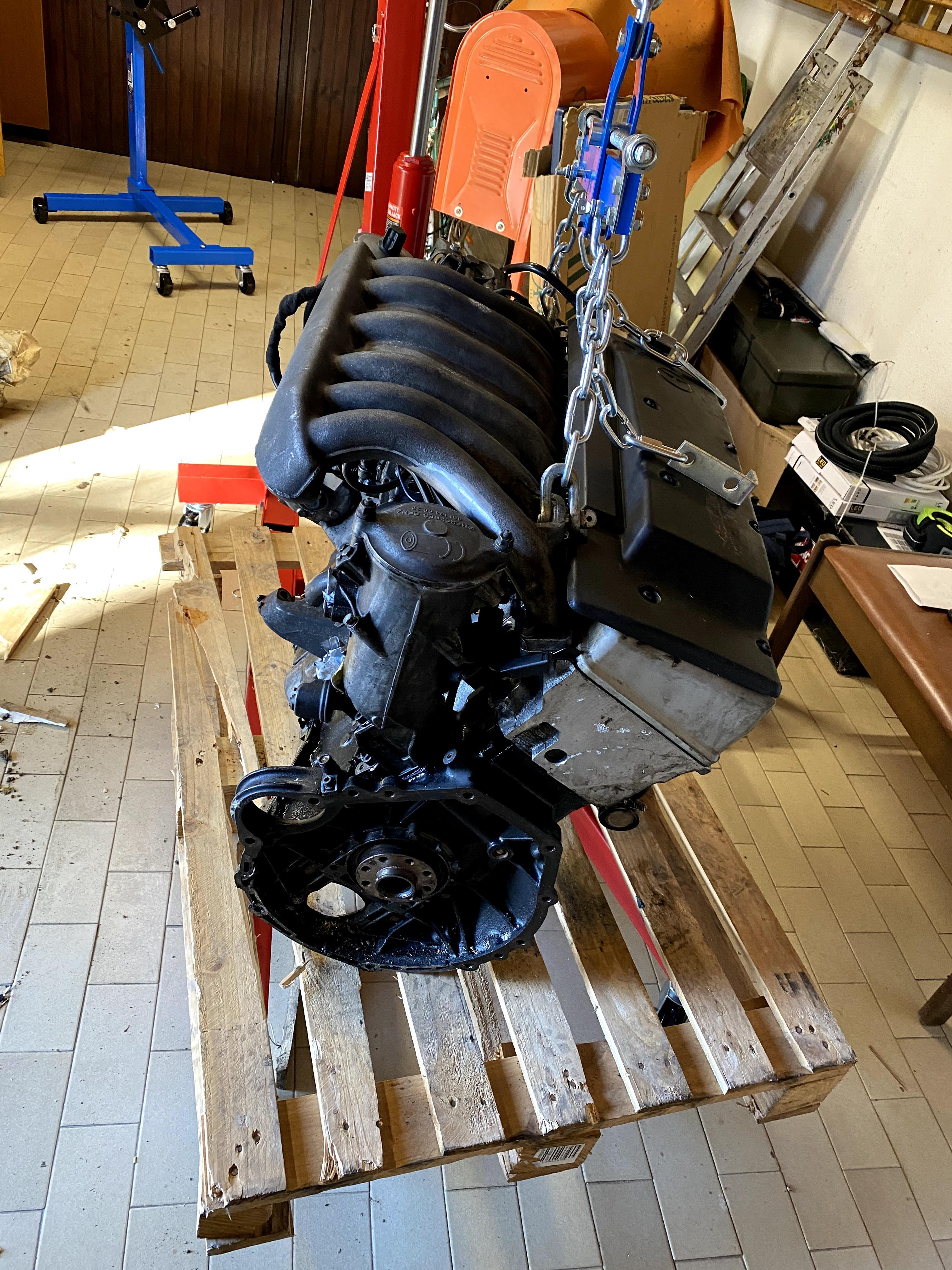 I'm so jealous that everywhere but the states can get REAL patrols, and not the soccer-mom'd Armada version that we get here.

Looking forward to seeing the progress on the engine swap.
Reactions: game-on

That is an awesome built. The OM606 is legendary and is (similar to the M57 BMW diesel you mentioned) often used for conversions of other makes.

Hats off for your work!! It is the first Patrol with an OM swap i see.
Btw the seller told you "this is how the motor is idling, the water temperature is steady".
Reactions: game-on

Thank you @MattLodi for the translation.

Eagerness got the better of me at this point and I started to disassemble the engine. Without washing it, of course.

After having an engine on the stand I started to contemplate whether I should go and do a full rebuild or only dress the engine up. It supposedly only had 158k kilometers (~100k miles).
I also checked the chain stretch (followed this procedure) and it seemed not to have any.

But if I already have the engine on the stand and have the opportunity to really restore the engine, why not take the chance and do it. And learn something along the way,
'Do it once, do it right is what I decided to do
--
The workshop manual is something that occupies my work table right now. It looks something similar to the next picture.

I had quite a struggle with pins that are pressed into the head and hold the chain sliders. Took me a better part of the day to safely extract them.
Mercedes make the tool specifically for this job, of course. I don't have that tool, so I followed this procedure. I ruined the threads soon after and had to retap the pins. After an eternity and a concoction of nuts and bolts, I finally managed to pull the pins out.

It was smooth sailing or rather a smooth disassembly from that point onwards. Took the cams off and soon the whole head followed.

I also had a few questions during the disassembly.

When taking the head off, I saw a bolt that had a clearly ruined head. The chain itself seemed undamaged. However, I still thought that somehow the chain did this.
After asking about it, it seems that somebody before me tried to take the head off and used a chisel to undo this bolt. More on this in OM606 Superturbo Facebook group.

The engine also had blocked coolant passages. I wondered what that tells me about the history of the engine. Seems that it only tells me that the previous owner used tap water as a coolant.

Also, one of the injector surroundings was covered with a 'white substance'.
After asking about it, it seems that this actually is an oxidized coolant. More on this here (question in a FB group).

game-on said:
Thank you @MattLodi for the translation.